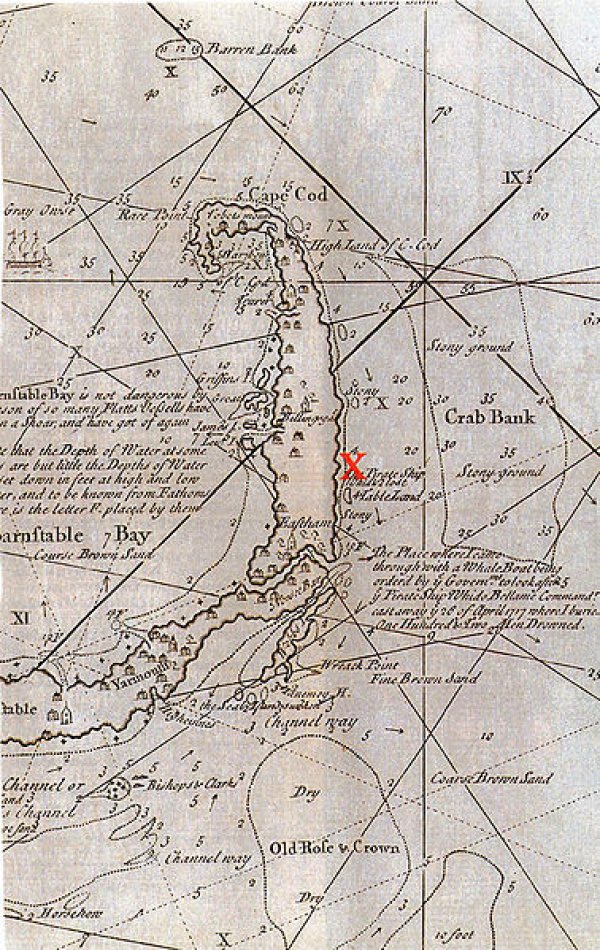 Better known as ‘Black Sam’, on account of his long black hair, Samuel Bellamy (1689 – 1717) was the wealthiest of his Golden Age contemporaries. His stellar career was to be dramatically curtailed, though…

The Devon-born Bellamy came to piracy after an expedition to Florida to salvage treasure from the sunken Spanish fleet in ended in failure – many others had plundered the riches by the time that he and his partner Paulsgrave Williams had arrived. Undeterred, the pair set their sights on Spanish shipping in the Caribbean instead. It was not long before Bellamy found himself serving alongside Edward ‘Blackbeard’ Thatch as part of Benjamin Hornigold’s crew.

This arrangement lasted until Hornigold was deposed as captain following his refusal to attack English vessels. Bellamy then set sail on his own account, and captured as many as 53 ships in a little over 12 months. By far his greatest prize was the 300-ton slave boat ‘Whydah’, which was returning from its maiden voyage laden with gold coins and valuable cargo. True to his reputation as a merciful and generous man, Bellamy swapped ships with the Whydah’s captain.

After refitting the Whydah Bellamy set a course up the US eastern seaboard, some think to visit his lover Maria Hallett in Massachusetts. But it was to be his final voyage. The Whydah and its sister ship the Mary Anne were capsized in a violent storm off Cape Cod that killed the majority of the crew – Bellamy included.

Six of those who survived were later hung for their part in Bellamy’s crimes. However the Whydah became the first authentic pirate ship to be recovered in North America, complete with over 60 cannon, the bell and a king’s ransom in precious jewellery and coinage. Much of it remains on display at a dedicated museum.