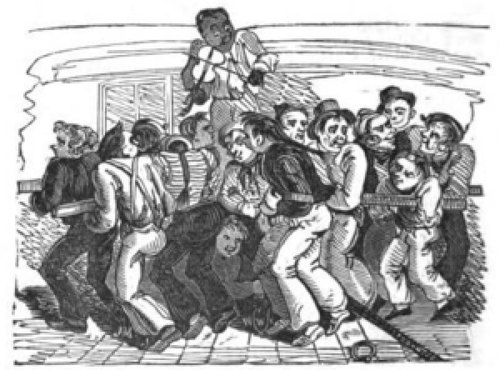 A heartily sung sea shanty is a boost to a crew’s morale as much as it is a method for easing the burdens of hard labour. A good sea song is incredibly catchy too, which is important if it is to be learned quickly and shared widely. The rousing ditty “Randy dandy O! is surely one of the most memorable.

The precise origins of this traditional song are lost in the mists of time, although the lyrics make mention of Cape Horn at the southernmost tip of Chile. A later verse includes “Valipo Bay” too, which is thought to be another name for the harbour in Valparaiso, also in Chile. So perhaps the song has a South American root.

The lyrics themselves have been somewhat censored over the years, certain phrases and verses being too bawdy for singing in polite company. However, the noted ‘shantyman’ Stan Hugill transcribed the version he was taught in his 1961 book ‘Shanties from the Seven Seas’:

Now we are ready to head for the Horn,
Way-ay, roll an’ go!,
Our boots an’ our clothes boys are all in the pawn,
Timme rollickin’ randy dandy O!

(Chorus) Heave a pawl, oh, heave away,
Way-ay, roll an’ go!,
The anchor’s on board an’ the cable’s all stored,
Timme rollickin’ randy dandy O!

Soon we’ll be warping her out through the locks,
Way-ay, roll an’ go!,
Where the pretty young gals all come down in their frocks,
Timme rollickin’ randy dandy O!

Come breast the bars, bullies, an’ heave her away
Way-ay, roll an’ go!,
Soon we’ll be rollin’ her ‘way down the Bay,
Timme rollickin’ randy dandy O!

Randy dandy O! is what is known as a ‘capstan shanty’, and was used to accompany the tiresome act of winding a rope or chain around the ship’s capstan. Songs of this type often had longer verses, perhaps reflecting the prolonged effort required.

It’s a stirring tune nonetheless, and is one that the Jackdaw’s crew will happily sing once they know it. Follow the link below to catch a sample. But be warned – once it’s in your head it’ll be there forever!