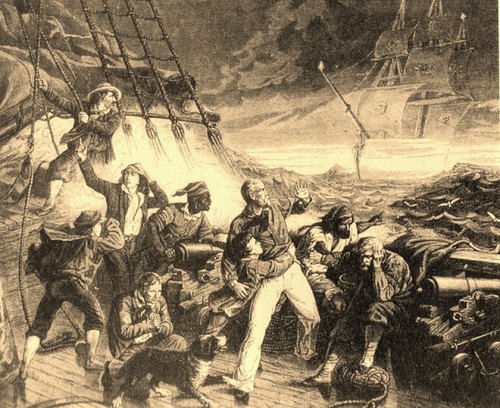 Sailors tend to be a superstitious lot, and that’s for sure, but nothing spooks them quite as much as the legend of the ‘Flying Dutchman’. To see it is usually a sign of imminent bad luck…

The Flying Dutchman has become a catch-all term for any number of supposedly phantom ships, although the original story dates from 1680. It tells of Captain Hendrick van der Decken, whose ship was wrecked in a ferocious storm as he attempted to round the Cape of Good Hope. Cursing God, he was thus condemned to sail the seas forever more.

Many a mariner has claimed to have seen the ghost of the Flying Dutchman since then, with sightings far and wide dating from the 18th century right up to more modern times and reports from some quite reputable sources.

The noted author Nicholas Monsarrat was an officer on the HMS Jubilee in 1942 when it had to take evasive action to avoid a mystery sailing ship moving at speed in otherwise windless conditions. Numerous U-Boat crews logged the spectral vessel during wartime too. However, the most famous witness was King George V. His 1881 account is bound to shiver many a timber:

“At 4 a.m. the Flying Dutchman crossed our bows. A strange red light as of a phantom ship all aglow, in the midst of which light the masts, spars, and sails of a brig 200 yards distant stood out in strong relief as she came up on the port bow, where also the officer of the watch from the bridge clearly saw her, as did the quarterdeck midshipman, who was sent forward at once to the forecastle; but on arriving there was no vestige nor any sign whatever of any material ship was to be seen either near or right away to the horizon, the night being clear and the sea calm. Thirteen persons altogether saw her.
…At 10.45 a.m. the ordinary seaman who had this morning reported the Flying Dutchman fell from the foretopmast crosstrees on to the topgallant forecastle and was smashed to atoms.”