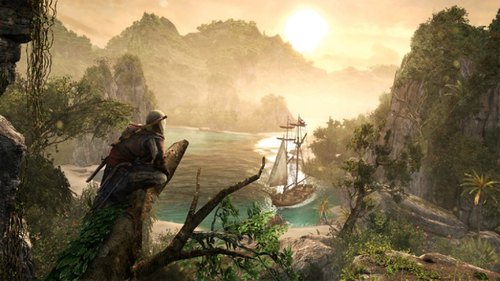 Want to know how the curren- and next-gen editions of ACIV: Black Flag compare? There is good news for all as we talk technical with Associate Producer Sylvain Trottier…

Sylvain: “The difficulty when developing for next-gen is that the first question from the art director or anybody else senior on the project is ‘can I have this also on current gen?’. Everybody just wants to make the best game ever, and the most beautiful. So, a lot of the tech we develop for next-gen, not all but a lot, ended up with a lower-end ‘spin-off’ version. So, if we have plants that are moving based on six or seven flexible points on next-gen, you might only get three on current gen.

“Especially in the next-gen versions, you’ll see how we have added physics for the plants, so that when you pass by them they’ll move, so it feels more natural. You can also easily see where you are in the plants even when hidden from view. Before in AC, when you were hiding, you would see an Animus effect to let you know you were in cover. Now, on the next-gen, it’s so obvious because we made it so that the leaves are over your head. You’ll see them move while you move.