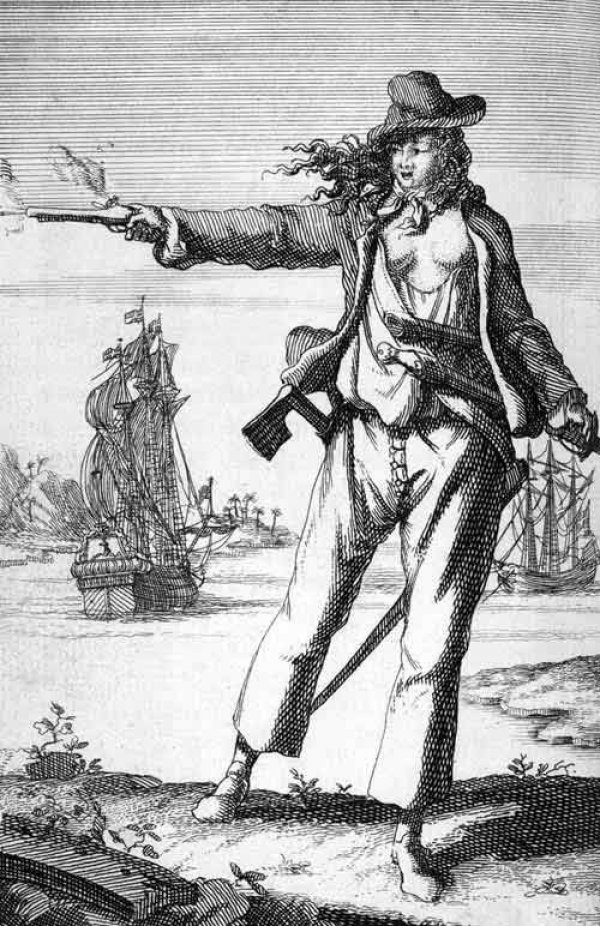 Anne Bonny came to piracy from relatively privileged beginnings. The illegitimate child of her lawyer father and his housemaid, she migrated to America and later rose to become one of the most feared female buccaneers.

Bonny seems to have been a wilful and tempestuous lass from an early age. She was widely rumoured to have killed a servant who had angered her and, as Capt Charles Johnson reports, once beat a young suitor so badly that “…he lay ill of it a considerable time.” However, her life took a more criminal trajectory after she married against her father’s wishes and moved to the Bahamas.

It is here that she caught the eye of a certain ‘Calico’ Jack Rackham. The attraction being mutual, the two eloped and sailed together. Bonny was apparently as fierce a fighter as any of her contemporaries, although her choice of male attire must have caused some consternation at the time.

Pirate careers are notoriously short-lived, though. Calico Jack’s luck ran out in 1720 and he was sentenced to hang. Bonny too, but her execution was postponed due to her pregnancy. It is then believed that her father came to her rescue and she moved to South Carolina, apparently living out the rest of her days as a prosperous and respectable woman.

If, in all this, you have formed the opinion that Anne Bonny was a good girl who made some bad decisions, consider the ice cold comfort she gave Rackham on the day of his execution. As Capt. Johnson tells it, she admitted that she was sorry for his predicament but followed with the killer blow that if he had fought like a man “…he need not have been hanged like a dog.”