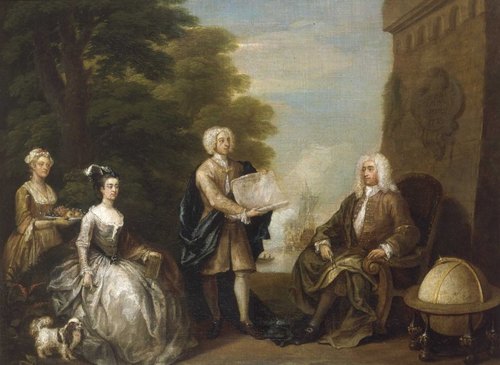 By 1717 Woodes Rogers had given up his privateering career and was installed as the first Governor of the Bahamas. None too comfortably at first, perhaps, since the islands were overrun with lawless and frequently inebriated pirates.

You can only imagine the scene that greeted Rogers upon his arrival at the capital, Nassau – a French ship set alight by a fleeing Charles Vane, Blackbeard resident in the local fort and a town left to rack and ruin by its pirate population. Even so, a sizeable number of Nassau’s unruly residents seemed pleased to see him, firing their guns in celebration as he landed.

Rogers set to work immediately, forming a government, organising rebuilding and granting the King’s Pardon to all those willing to accept it. He also instructed ex-pirates Benjamin Hornigold and John Cockram to hunt down Vane and others who had refused the amnesty. They were unsuccessful in locating their primary targets, but the executions of those they found instead did much to keep Nassau’s inhabitants in order.

Vane and Blackbeard eventually got their comeuppance and Rogers successfully defended a Spanish assault. However, the English government refused to underwrite his mounting expenses and Rogers soon found himself languishing in a debtor’s prison. A prominent role in Capt. Charles Johnson’s popular book saw his reputation restored and his former role reinstated, but his health had suffered greatly and he died in 1732. Nassau and the Bahamas were free of pirate control nonetheless, and piracy in the region had all but diminished for good.