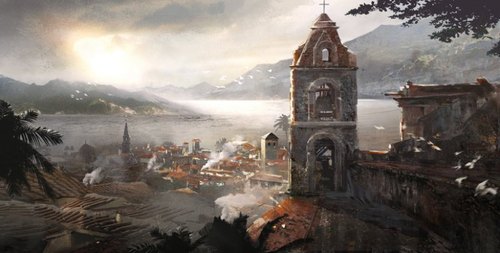 Jean-Sebastien: “We spent a lot of energy and time to recreat the mood of, for instance, Havannah, Nassau and Kingston: the architecture, the atmosphere, the kind of people you would meet there and of course the languages that are expected. The culture, the indigenous animals… we really tried to remain historically accurate, but also geographically correct. There has been research to find maps from these times to have the same kinds of layouts that the cities had.”

Martin Schelling: “We respect the key moments in historytoo, so the big hurricane that sank the 10 galleon Spanish Armada, full of gold. Also, when Nassau was afflicted by disease and everyone fell down sick.”

Jean-Sebastien: “Because it is historically accurate, we take time to show the real men behind the characters of Blackbeard, for instance. In Black Flag, this would mean encountering Edward Thatch, the man that would become Blackbeard.”

Martin Schelling: “And we still have the Animus Database, so that each time you encounter a new landmark or character, they are added to the Database – accessible in-game, and the Companion App. There are letters that you find in the game that give more background, and these are also unlocked in the Companion App so that you can read the next day on the train to work.”